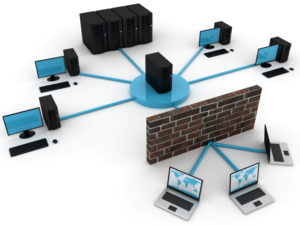 One of the many tasks of a system administrator is the installation and setting up of firewalls in an organization. A firewall is a vital component of a firm’s network and it plays an extremely important part in securing and protecting it; network security refers to methods of addressing external and internal threats to a company’s network system. Firewalls can help secure a network from both internal and external dangers.

Everyone has heard of the word ‘router’; it is a device that essentially connects or acts as a bridge between two or more different networks. When an organization’s internal network is connected to the internet, it is usually assumed that the network is vulnerable to threats from the external network which is the internet in this case.

Therefore, it is important that a firewall is installed and managed by a professional system administrator to provide the maximum amount of protection to your company’s network infrastructure. When done correctly, the advantages of using firewalls cannot be ignored. Their main benefits are:

One of the most harmful programs ever written, a keylogger tracks your key strokes and transmits the information back to cybercriminals. In this way, they might gain access to your private accounts such as bank accounts. With a firewall in place, keyloggers will have no chance of being lodged into your computer systems as they will be blocked in the first place during an incoming connection to the router.